After a four-week winning streak, XAU / USD struggled to make a decisive move either way and fluctuated between key technical levels. After breaking above $ 1,820 on Tuesday, gold turned south in the second half of the week but managed to close the week a little above the key 100-day SMA, which currently stands at $ 1,796 .

In the absence of high-level macroeconomic data releases and fundamental developments, risk perception remained the main driver of the market early in the week. The sharp drop observed Monday and Tuesday in the main Wall Street indices allowed the greenback to find demand. However, gold has also capitalized on risk flows, suggesting that the precious metal is seeking to regain its safe haven status and has limited the rise in XAU / USD.

Although the USD lost some strength amid improving midweek market sentiment, XAU / USD continued to move sideways within its weekly range.

On Thursday, the US Department of Labor reported that there were 419,000 initial claims for unemployment benefits in the United States during the week ending July 17. This reading is worse than the 350,000 market expectations, but has been largely ignored by market participants. Other data from the United States showed existing home sales rose 1.4% on a monthly basis, while the national median price of existing homes rose 23.4% from June. 2020 to reach $ 363,000.

In the meantime, the European Central Bank (ECB) announced Thursday that it is keeping interest rates unchanged on major refinancing operations, the marginal lending facility and the deposit facility at 0.00%, 0, 25% and -0.50%, respectively, as expected. In its policy statement, the ECB revised its forward-looking guidance and said it would allow inflation to temporarily exceed before taking action. The ECB’s commitment to an accommodative policy weighed on the common currency and helped the USD continue to outperform its rivals.

IHS Markit’s preliminary PMI reports on Friday revealed that economic activity in the manufacturing sector continued to grow at a record pace in July, with the manufacturing PMI rising from 62.1 to 63.1 in June. On a negative note, the services PMI index edged down to 59.8 from 64.6 and failed to hit analysts’ estimate of 64.8. Commenting on the data, “Inflationary pressures and supply constraints – both in terms of labor and material shortages – nonetheless remain major sources of uncertainty for companies, as does the delta variant, all of which drove business optimism for the coming year to the lowest seen so far this year, ”said Chris Williamson, chief economist at IHS Markit.

Next week will be quite busy when it comes to high-level data releases. On Tuesday, June, durable goods will roll out of the United States at the same time as the Conference Board (CB) consumer confidence index. The University of Michigan (UoM) preliminary consumer sentiment index for July showed a negative shift in consumer sentiment and a sharp rise in inflation expectations. A similar picture in the BC report is likely to give the USD a boost.

On Wednesday, the FOMC will announce its interest rate decision and release the monetary policy statement. While delivering his prepared remarks at a congressional hearing earlier this month, FOMC Chairman Jerome Powell said the job market was still far from the progress needed to begin cutting bond purchases. However, policymakers are expected to discuss the phase-out plan at next week’s meeting and a signal towards a reduction in asset purchases before the end of the year is likely to lift the greenback. Nonetheless, gold could remain resilient if a hawkish shift in the Fed’s policy outlook triggers a sell-off in US stocks. On the other hand, the Fed could choose to take a more cautious tone due to the uncertainty caused by the delta variant of the coronavirus and weigh heavily on the USD by hinting at a possible delay in tapering.

On Thursday, the U.S. Bureau of Economic Analysis will release its initial estimate of second-quarter gross domestic product (GDP) growth, which is expected to improve to 7.9% on an annual basis from 6.4%. Finally, the personal consumption expenditure price index (PCE), the Fed’s preferred inflation indicator, will appear in the US economic record on Friday. Annual core PCE inflation is expected to rise to 3.7% from 3.4% in June. A higher than expected inflation reading could support the dollar ahead of the weekend and vice versa.

The short-term technical outlook for gold remains neutral with a bearish bias as the price remains near the lower bound of the weekly consolidation channel. Additionally, the Relative Strength Index (RSI) indicator on the daily chart has pulled back below 50, suggesting that buyers are struggling to stay in control.

Nonetheless, sellers could wait for XAU / USD to close daily below $ 1,796 (100-day SMA) before looking to increase bearish pressure. Below this level, $ 1,790 (Friday low) lines up as intermediate support ahead of $ 1,775 (61.8 Fibonacci retracement from April to June).

The FXStreet Forecast poll indicates a slightly bullish outlook in the near term with an average target of $ 1,806 over one week. However, experts don’t seem to expect buyers to continue to dominate the price of gold as the average target falls to $ 1,803 on a month-to-month basis. 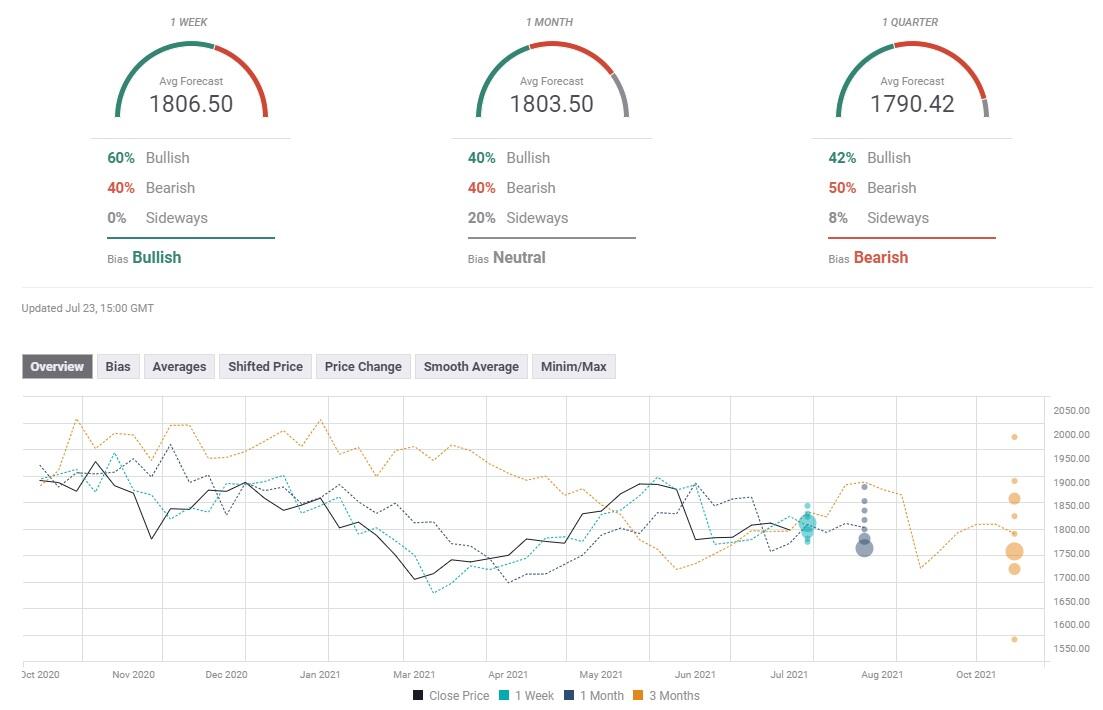